Jim Stanford is Economist and Director of the Centre for Future Work, based at the Australia Institute. The Australia Institute is Australia’s most influential progressive think tank; the Centre for Future Work is a new Institute initiative focusing on issues of work, labour markets, income, economic development, skills, and more. The Centre was founded in May 2016, and Jim is its inaugural Director.

Jim recently relocated to Sydney, Australia from Toronto, where he is one of Canada’s best-known economic commentators. He served for over 20 years as Economist and Director of Policy with Unifor, Canada’s largest private-sector trade union (formerly the Canadian Auto Workers). He still advises the union, and is also the Harold Innis Industry Professor in Economics at McMaster University in Hamilton, Canada (fractional appointment). He is also an Honorary Professor in the Department of Political Economy at the University of Sydney. 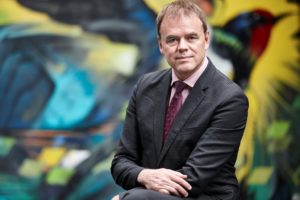 Jim received his Ph.D. in Economics from the New School for Social Research in New York. He also holds an M.Phil. from Cambridge University, and a B.A. (Hons.) from the University of Calgary.

Jim is the author of Economics for Everyone: A Short Guide to the Economics of Capitalism (second edition published by Pluto Books in 2015), which has been published in six languages. Stanford has written, edited or co-edited five other books, and dozens of articles and reports in both peer-reviewed and popular outlets. Jim maintains an active presence on social media through his Twitter (@jimbostanford) and Facebook (Jimbo Stanford) accounts.

Jim has designed and taught numerous courses on economics for academic and non-academic audiences, including a unique week-long popular education course in economics for trade union members he has delivered in Canada, the U.S., Australia, and New Zealand. He is recognized for his ability to communicate economic concepts in an accessible and humorous manner.